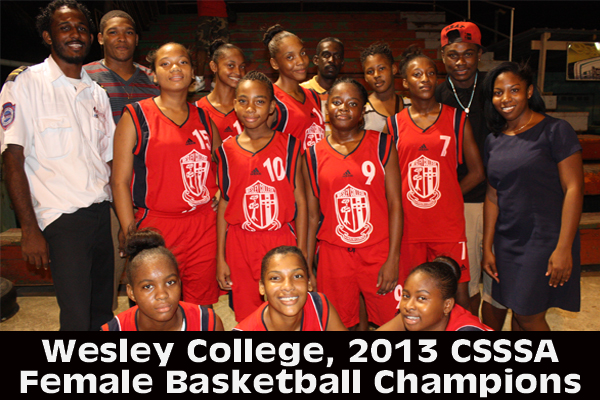 As we reported in our Sunday, December 8, edition, the best-of-3 games Finals series for the Central Secondary Schools Sports Association (CSSSA) high school basketball tournament tipped off on Thursday, December 5, at Bird’s Isle with Wesley girls taking game 1 by an 18-15 score over Gwen Liz High; while the ACC boys blew out their SJC opponents, 68-42.

On Friday, in game 2 of the Finals, Gwen Liz girls rebounded to even the series with a similar 18-15 score over Wesley girls, thus forcing a game 3. Ann Ma Chen led Gwen Liz with 8 pts, while Shanice Humes led Wesley with 4 pts. But the Finals ended without a fuss for the boys, as ACC again demonstrated their dominance over SJC, beating them this time by a 72-55 score. Top scorers for ACC were Douglas Valley and Antwan Rivero with 17 pts apiece, and Francis Arana with 14 pts; while SJC was led by Andrew Vasquez with 20 pts and Dudley Erskine with 14 pts.

With the completion of the male championship, the MVP award (donated by Young’s Engineering Consultancy) was given to Douglas Valley of ACC; while the Silent Hero Award (donated by Mr. Emory Bennett) went to Holdane Swazo, also of ACC.

The decisive game 3 of the female Finals took place on Saturday, December 7, and it was a real nail-biter, with Wesley coming away with the 1 point edge, 25-24, over Gwen Liz High. Shanice Humes led the way for Wesley with 14 pts, while Vivica Young scored 10 pts for Gwen Liz.