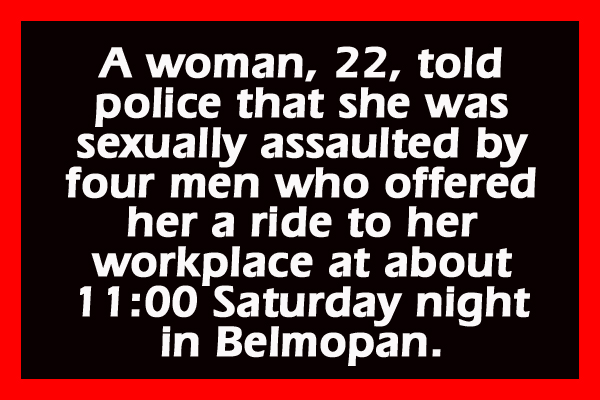 A woman, 22, told police that she was sexually assaulted by four men who offered her a ride to her workplace at about 11:00 Saturday night in Belmopan.

The woman said that she was walking to her place of work when a white van in which there were four men stopped beside her and offered her a ride. She accepted the offer and entered the van, and they drove away.

According to the woman, as they neared her workplace, she alerted the driver, but he only accelerated, and told her that she would have to do what they wanted, or they would kill her.

Fearing for her life, the woman cooperated. She was taken to a dark, isolated location, where she was ordered to perform oral sex on two of the men.

After that ordeal was over, at least three of the men took turns raping her.

After the men had finished, one of them walked her out of the area, and she was able to wave down a vehicle that was passing by.

The driver then took the woman to the police, where she made a formal report at about 2:45 Sunday morning.

The woman was taken to a doctor, where she was examined, and it was confirmed that she had been sexually violated.

Police began an immediate investigation, but so far, the men have not been found.