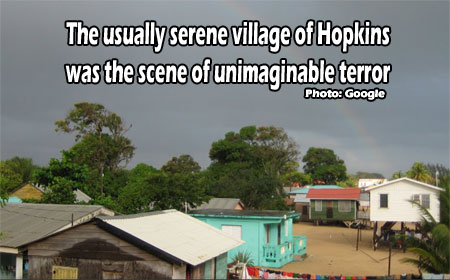 HOPKINS—Late breaking news reaching Amandala tonight indicate that a woman was killed, while her husband has been left badly injured following a deadly home invasion that occurred in the coastal community of Hopkins in the Stann Creek District earlier tonight.

We understand that the female victim has been identified as Josephine Augustine, and her husband, Dudley Augustine, is currently undergoing treatment at the emergency room of the Southern Regional hospital in Dangriga.

Details are sketchy at this point, however.

Three weeks ago, on July 26, a home invasion that took place on Mopan Street in Belize City claimed the lives of two tacos vendors, Carlos Mayorga, 52, who died on the spot after he was shot in the chest and in the back of the head, and Alida Ascencio, 42, who later succumbed two and a half days after being shot in the left side of the chest and abdomen.

Two other women who worked as Mayorga’s helpers were also callously shot in that incident, and a 21-year-old Belize City resident has since been remanded in connection with those homicides/shootings.

Then, on Wednesday July 30, just four days later, Betty Westby, 51, a pastor’s wife, and her family, were held up at knifepoint by an individual who wrenched open the front screen door; however, she was fortunately able to thwart the robbery by bravely gripping the hand of the assailant, who carried a knife, until neighbors were alerted and the unnerved invader fled, along with his accomplice, who had waited outside the house.

Tyrone Davis, who was known to the family, and whose hooded sweater came off during the struggle with Westby, was later apprehended and charged for the offense, and for stealing a loaded .22 rifle belonging to Westby’s husband, Pastor Maurice Westby, who was not at home at the time of the incident.

The most recent home invasion happened in Belize City on August 1 when a businessman who lives on southside Belize City was tied up by two masked men at around 2:00 that morning and robbed of an assortment of electronic items totaling over $20,000 dollars.

Police are investigating, but no one has yet been arrested for that crime.