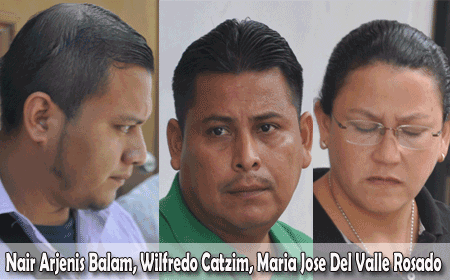 BELIZE CITY, Wed. Apr. 6, 2016–Three persons from the Corozal Free Zone (CFZ), a Mexican businesswoman and two Belizeans were released on bail late this afternoon after they pleaded not guilty in the Belize City Magistrate’s Court to Financial Intelligence Unit (FIU) charges of failure to declare funds when leaving Belize.

The arraignment began this morning before Senior Magistrate Sharon Fraser, who read two charges levied against Mexican businesswoman Maria Jose Del Valle Rosado, the wife of Earnesto Alonzo de Miguel, a cigarette importer in the CFZ, who was shot and killed in Chetumal, Mexico, last November.

Rosado entered her not guilty plea through the court interpreter, who translated from English to Spanish.

The hearing had to be adjourned, however, because Senior Counsel Magali Marin-Young, who represented all three accused, was not yet served with the facts that the FIU is relying on to make its charges against the trio stick.

After the charges were read to her, and Magistrate Fraser asked Rosado if she understood what was read to her, Rosado replied, “I understand, but I did declare the money.”

According to the FIU, on Tuesday, April 5, the 42-year-old Rosado attempted to leave Belize with US $137,130 without first reporting to the FIU as is stipulated by the 2008 Money Laundering and Terrorism Act.

When the hearing resumed in the afternoon session of the court, Wilfredo Catzim, 36, a cane farmer of San Narciso, Corozal District, was arraigned on a charge of failure to declare funds when leaving Belize. Catzim had in his possession US $9,800.

The third person to be charged is Belizean Nair Arjenis Balam, 25, who is employed in the CFZ.

Balam was charged for failure to declare US$9,900.

The trio was busted in the departure lounge at the Philip Goldson International Airport as they awaited their flight that would have taken them to Panama.

Magistrate Fraser explained to Marin-Young that the offense with which her clients were charged is a strict liability offense: “Either they declared or they did not declare,” Fraser told them.

Since the three accused pleaded not guilty, the inevitable question of bail came up. The court was mindful that Rosado is a Mexican national and as such is a flight risk.

Marin-Young, however, assured the court that Rosado is a businesswoman with ties to Belize, since she is also the director of a company in the CFZ.

Marin-Young told the court that Rosado is also the beneficiary of lands in Belize for which she has just received the title.

Besides her close ties to Belize, the Chetumal resident is also the mother of a 12-year-old child for whom she is the sole breadwinner Marin-Young told the court.

With the FIU prosecutor Leni Ysaguirrie not objecting to bail for the three accused, the court granted all three, bail.

Due to her foreign status, however, Rosado’s bail was set at $50,000 and the court stipulated that the bail had to be a property bail by a Belizean with the necessary encumbrance. The condition for Rosado’s bail is that she has to surrender her travel documents to the court and report every Tuesday to the police sub-station at Santa Elena.

Since Rosado will have to travel to the CFZ from her home in Chetumal occasionally, the court has given her a note that she can show to Belize immigration to notify them that her passport is lodged at the court until her case is finished.

In addition, Marin-Young informed the court that Rosado also has a home in the CFZ, located upstairs her business where she can stay to remain in the court’s jurisdiction.

Bail for the two Belizeans was set at $8,000 with two sureties of $4,000 each. All three are expected to return to court on June 13, when the trial is scheduled to begin.

After the hearing, Marin-Young told Amandala that her clients were traveling to Panama with the money to pay suppliers, because they can no longer access the services of the US banks with which they have been conducting their business due to the de-risking problem Belize banks have been experiencing with US banks.

Marin-Young said they had declared the money when they were checked by Customs.