BELIZE CITY, Mon. Dec. 6, 2021– The National Amateur Women League (NAWL) 2021-22 Opening Tournament completed its regular season with the fifth week of football this past weekend, where 2 games were played on Saturday, December 4, and 3 on Sunday, December 5. With the completion of a single round-robin of games in each of the two zones, North and South (See standings below.), the top two teams in each zone will now go on to the semifinal playoffs this coming weekend.

On Saturday, up north at the Santiago Ricalde Stadium, Gabriela Cowo (36’) gave home standing Corozal United Warriors the first half lead, but Elva Nunez (67’) got the second half goal for San Pedro Pirates to secure a 1-1 draw.

Meanwhile, down south at the Victor Sanchez Union Field in Punta Gorda, it was the visitors, Rumberas FC from Independence coming away with a 3-0 victory over home team Hyper Phoenix FC. Shaking the net for Rumberas were Shendra Casimiro (34’) and Kaite Jones (63’ & 78’).

Then on Sunday, it was a 1-1 affair at the Norman Broaster Stadium between Cayo Dreamers FC and Suga City Girls FC from Orange Walk. Patricia Espinoza (43’) gave the visitors a 1-nil lead just before halftime; but the home squad got the equalizer early in second half from Brent Hernandez (59’).

And it was another shutout down south at the Carl Ramos Stadium, where Kulcha United made light work of their Griga comrades, Stann Creek United FC Hyper Jewels, whom they defeated 4-0 with goals from Khalydia Velasquez (69’ & 76’), Shayama Caliz (78’) and Taryn Arnold (85’ PK). 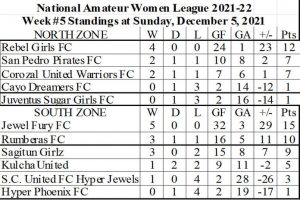