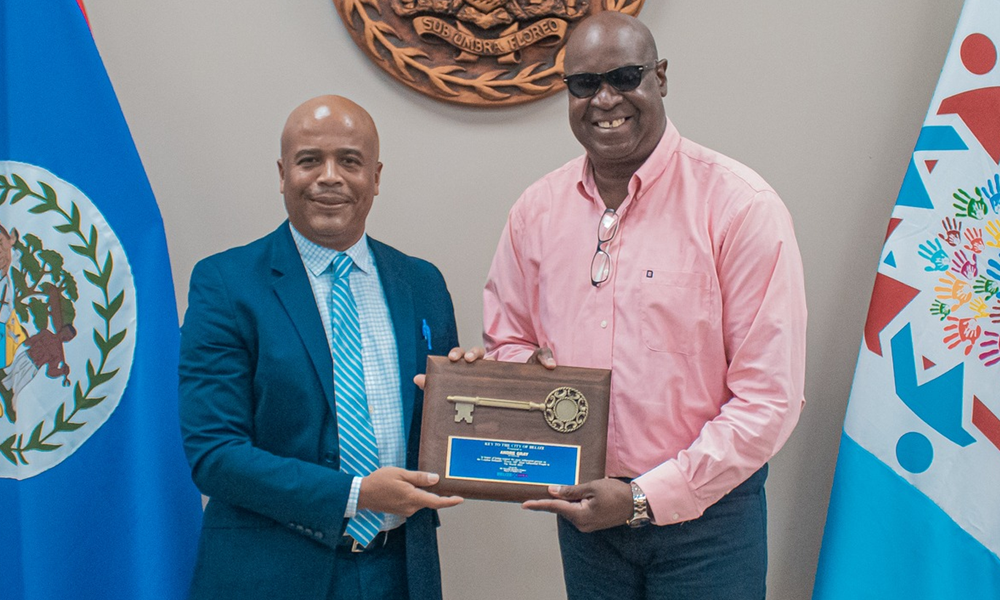 Yesterday, in a cordial ceremony with Belize City Council officials and invited friends of the special guest, Belizean world renowned inventor Andre Gray was given a very special honour by Belize City Mayor, Bernard Wagner, when he handed over to Mr. Gray the symbolic KEY to the old capital Belize City at the City Council conference room in the Commercial Center in downtown Belize City.

Gray’s documented accomplishments in the technological world of this digital age are astounding, though his work is not performed in the public eye, like most of our popular artists and athletes who grab our attention on stage and on the playing fields and courts in various sports and entertainment arenas.

The work that Andre Gray has been, and is engaged in, is in advancing and facilitating much of the communications technology we take for granted each time we use a cell phone or pull up a tune from YouTube.

Curious fans can easily utilize the internet that he helped develop, by clicking on Google and checking the websites that come up for the name Andre Gray, e.g. thecoli.com, jaamzin.com, postnewsgroup.com, ctpost.com, twitter.com, thelosangelestribune.com, soundcloud.com, youtube.com, and dailysiliconvalley.com to get a better background of the work this brother has accomplished.

The Belize City Council’s Facebook page proudly declared: “Today we are excited to present the Key to Belize City to Mr. Andre Gray, a Belizean-American inventor who is known as the Godfather of Internet Inventions.” And it goes on, “His remarkable impact on the digital revolution which paved the road for technologies we use in our daily lives is astonishing. Mayor Bernard Wagner and the Belize City Council is proud to acknowledge a born Belizean who quite literally has changed the world…”

Congratulations, and continue to enjoy your home visit in the Jewel, brother Andre Gray!