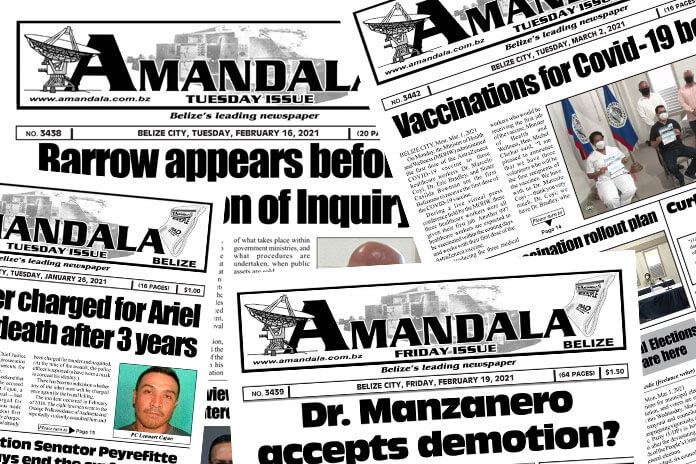 During the House of Representatives meeting at which the 2021/2022 budget was presented, the Opposition members walked out after Cayo South area representative, Hon. Julius Espat, told the Leader of the Opposition, Patrick Faber, to “sit down, boy”. Faber demanded an apology for what he deemed as unparliamentary language, but none was forthcoming. The Speaker of the House, Hon. Valerie Woods, did ask for the statement to be struck from the record, but the Opposition considered that insufficient.

While Espat was on the Speaker’s radar for his seemingly uncontrollable outbursts, outside, Prime Minister John Briceño was placed on the hot seat by the media about millions in GST owed by SMART, a company partially owned by members of his family. A leaked letter to his sister, Vanessa Briceño, referenced some $11.1 million owed. Briceño said the amount was miscalculated and that his sister, the registered taxpayer, was trying to get the issue resolved for years.

On the environmental front, a letter dated April 9, 2021 from the Chief Environmental Officer, Martin Alegria to Portico Enterprise Ltd. green-lighting the construction and operation of Port of Magical Belize raised concern for conservation NGOs, which condemned the government’s lack of a sustainable cruise port policy.

A heat-wave-induced stroke was said to be the cause of death of 15,000 chickens on the weekend of April 10. The dead birds were improperly dumped on the roadside in Spanish Lookout because the gate to the dumpsite was locked. Stakeholders in the poultry industry blamed that mass death on inadequate preparation to deal with annual heat stress. 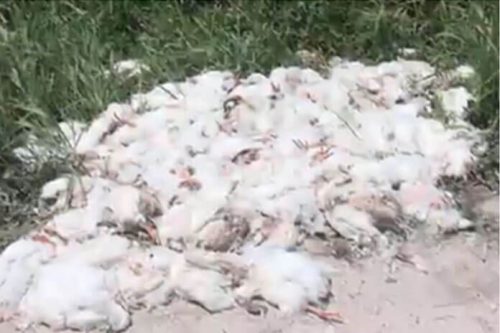 In partnership with the Caribbean Agency for Justice Solutions, the Belize court system entered another era with the introduction of electronic filing through “Folio E-Filing,” launched on April 26.

One case that had recently concluded before the courts stemmed from a failed land compensation deal. The claimant, Olivia Villanueva, then took the UDP administration to court. Two days ahead of the 2008 general election, Villanueva was sold 102.5 acres of Turneffe Island Range for a paltry sum of $27,300, and the Supreme Court ruled that Villanueva should be paid $5.6 million. 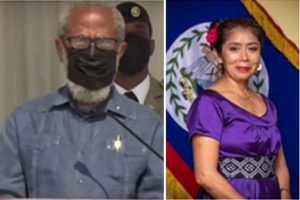 We started off May 2021 with tense relations between the media and the joint unions after the Public Service Union issued a release announcing it would boycott some media houses that aired paid political ads which it said amounted to a smear campaign against their leadership. The BNTU president called it union-busting on the part of the Briceño administration.

Our top story for the mid-week edition on May 12 was, “Abusive relationship ends in fatal arson.” A mother, 36-year-old Kendra Middleton, and her 3-year-old son both perished inside their St. Matthews home when her ex-common-law husband, Demas Mendez, set her home on fire. 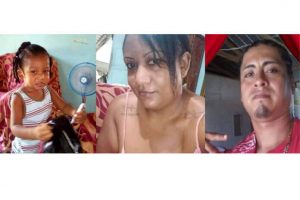 On May 11, it was announced that Dr. Carla Barnett had been selected to be the secretary general of CARICOM — becoming the first woman and Belizean to serve in the post. Among this year’s victims of COVID-19 was Belize football legend Charles Hogan, who lost a battle with the dreaded illness after two weeks in May in California.

A narco jet landing in Blue Creek on May 13 made it to the headlines. Air asset surveillance footage revealed that upon landing, the executive jet was swarmed by at least 60 persons, who unloaded the aircraft’s content in record time.

Two days before, Ian Patt, 30, the nephew of UDP deputy leader Hugo Patt, was among those detained for a drug bust of 63 pounds of marijuana in vehicles they were driving in Ladyville. It was later learned that one vehicle was registered in Hon. Patt’s name, and he explained that the vehicle, used to transport cane, was rented out.

In Belize City, the bodies of a couple (Leticia Carillo Frankel and Mark Frankel) who had gone missing earlier in the week were found on Thursday, May 20 off a feeder road along the John Smith Road. It is believed they were the victims of a burglary that ended in murder. 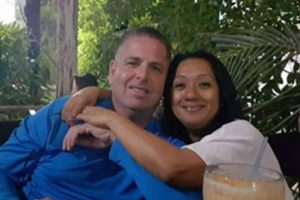 In Punta Gorda, a paraplegic, 60-year-old Marcus Tracy, was found chopped to death on May 21 in his home, though no sign of forced entry was observed.

For the first time, a woman, Dian Vasquez, was named Chief Transport Officer. She holds a Master’s Degree in Diplomacy and Environmental Management and Development from the Australian National University.

Our headline on Tuesday, May 25, was also transport-related, as motorists across the country engaged in panic buying due to a rumoured fuel shortage that actually precipitated a shortage. Thankfully, it was not prolonged.

The following day, on Thursday, May 26, authorities intercepted two fuel trucks with contraband fuel (6,000 gallons) about 600 yards from the Guatemalan border. A Belizean and a Guatemalan were detained.

One of the legislations demanded by the joint unions, the Protected Disclosures Bill 2021, was presented at a House of Representatives meeting on Friday, May 28. The purpose of the law is to put in place measures to protect whistleblowers from punitive acts against them.

The single incident that attracted the most international press coverage on Belize, at least in recent history, was the killing of Superintendent Henry Jemmott by Jasmine Hartin, 32, 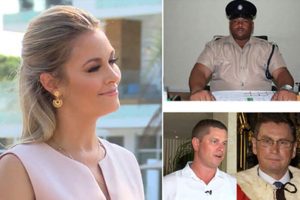 the ex-partner of Andrew Ashcroft – son of Michael Ashcroft. The shooting with Jemmott’s own police-issued Glock occurred during curfew hours on Friday, May 28. Hartin claimed that Jemmott had been teaching her how to use the gun and it accidentally went off. Both had been socializing on a pier in San Pedro and some cocaine was also found on her person. She was later charged with manslaughter, which was decried by the Jemmott family. Less than two weeks later, she was granted bail of $30,000. Abandoned by the Ashcroft family, Hartin is now embroiled in a custody battle with Andrew Ashcroft for their young twins.

Also killed on Friday, May 28, was BECOL operations supervisor Wayne Emmanuel, 49. It is believed he was targeted by bandits who wanted to steal his vehicle to take it across the border, something that has become a common crime out west.

May 31st saw the reopening of the land borders for tourists only. These were closed since March of 2020.

At the beginning of June, Prime Minister John Briceño visited Guatemalan president Alejandro Giammattei. Among matters agreed during the working visit was the reactivation of the institutional framework of the Partial Scope Trade Agreement and the completion of the implementation of 13 bilateral cooperation agreements signed years before in Placencia.

On June 3, Daniel Ack, 28, a Coast Guard officer, and his common-law wife, Jamie-lee Cruz, 27, were busted with a sizeable amount of uncustomed marine products (320 pounds of bass fillet fish, 46 pounds of salmon fillet, and 317 pounds of jumbo shrimp), for which they were charged. 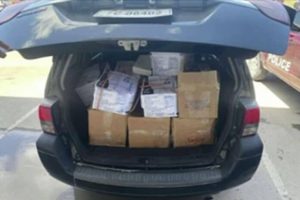 In political news, a video of Opposition leader Hon. Patrick Faber in the middle of an aggressive outburst against the mother of his 2-year-old daughter in the presence of the child led Mesopotamia area representative, Hon. Moses “Shyne” Barrow, to attempt to remove Faber from that role. In a public post, Barrow said that Faber had lost the confidence of the majority of Opposition members in the House of Representatives. Barrow recommended the Hon. Tracy Taegar-Panton, Albert area rep, as an appropriate replacement but she did not entertain his suggestion. Barrow himself would go on to briefly fill the post near the end of June after securing signatures from the Hon. Hugo Patt and his aunt, the Hon. Denise Barrow, that were placed in a letter submitted to the Governor General.

Beginning on June 14, the work hours for public officers were reduced by 5 hours weekly. This was one of the compensation measures offered by the Government to the joint unions to get them to accept the 10% salary cut.

Also in June, there was worry within the health sector when it was learned that nurses were abandoning Belize for more attractive opportunities overseas. Some 35 Filipino nurses on special contracts resigned from the KHMH. The lack of a meaningful retention package was blamed for the exodus along with Government’s failure to increase the number of nursing jobs and key nursing posts in tandem with population growth.

The entire nation’s attention was drawn to some mysterious smoke emanating from the mountains in the area of the Sleeping Giant. The plumes of smoke lasted for days and it was finally classified as burning debris collected on the forest floor, possibly lit by a lightning strike. 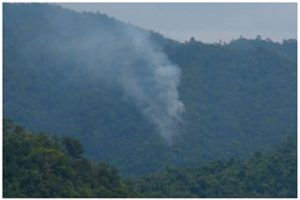 On June 16, 2021, Acting Chief Justice Michelle Arana ruled against the Government in favour of the village of Jalacte and ordered that residents of that village receive $6.3

million compensation. The case had to do with the construction of a road to the border by the government on customary Maya lands without the community’s consent. The Government has indicated its intention to appeal.

Computer genius and antivirus software pioneer, John McAfee, who had a colourful past and had resided for an extended period in Belize, passed away in a prison cell in Barcelona, Spain, at the age of 75.

On June 24, two Belizeans, Gladimir Chable and Chris Folgarait, were killed in broad daylight on the beach in Tulum, Quintana Roo, Mexico. The mother of one of the victims said she was unaware that the men were in Tulum and had no knowledge of their activities.
On June 30, the Minister of Health and Wellness notified the country that the more severe Delta variant of the SARS-CoV-2 virus was believed to be in Belize.