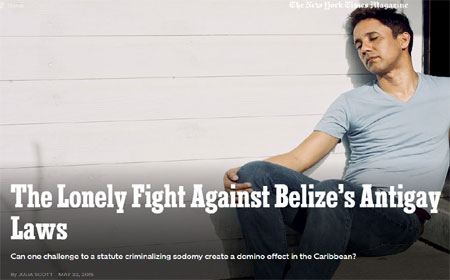 BELIZE CITY, Tues. May 26, 2015–Today, an article published in The New York Times Magazine was brought to our attention, not because the article featured Belize’s best-known homosexual, Caleb Orozco, who has sued the Government of Belize for its anti-sodomy laws (the Supreme Court Justice has not yet delivered his judgment), but because the Amandala and its editor-in-chief were alleged in the article as having made a definitive statement against UNIBAM, of which Orozco is the president, through an editorial of December 9, 2011, entitled “UNIBAM divides Belize.”

The alleged comments, supposedly from the Amandala editorial, which appeared in The New York Times Magazine article, “The lonely fight against Belize’s antigay laws,” by Julia Scott, dated May 22, 2015, were used to buttress the article’s attempt to portray Orozco as a persecuted, pitiful homosexual man who is jeered at, threatened and tormented at every turn by Belizeans who are not in sympathy with his lifestyle.

In fact, the article portrayed Orozco as being in fear for his very life because of his stand for his homosexual rights, and the rights of similarly-oriented persons.

If the article is to be believed, Orozco spends his time running and dodging his attackers, cannot walk the streets without being threatened, jeered and mocked; is repulsed and isolated wherever he goes (except, obviously, when he is with his own kind); and in fact, lives a hellish life just because of his sexual orientation.

The story, of course, is a gross exaggeration of life for Caleb Orozco. Ms. Scott, the writer, on a mission from her bosses, The New York Times Magazine, to engender sympathy and support for the LGBT movement at any cost, cannot know (and she is supposed to be a professional writer) much about Orozco’s real life, but Belizeans who know, see and interact with him would condemn the greater part of her story as untrue.

They will tell her, in fact, that while there are many Belizeans who are heterosexual, and consider homosexuality a sin, they nevertheless believe that Orozco’s sexual preferences are his own business. They will not interfere with him. They know, too, that Belize has never taken anyone to court, or imprisoned anyone for being a homosexual.

There are people who will mock Orozco, of course, but there are simply not enough of these incidents to even faintly buttress Ms. Scott’s argument that he lives a tortured life.

In fact, not only does the story itself appear to be a skillful fabrication in pursuit of The New York Times Magazine’ LGBT agenda, but Orozco’s large picture under the headline appears to be cleverly contrived. To be blunt, Orozco appears to have posed for the picture, under the coaching, of course, of Ms. Scott.

The foregoing are our general comments on The New York Times Magazine article, but specifically, the only issue of concern to us is the quote purportedly lifted from the Amandala editorial, “UNIBAM divides Belize.”

“‘Homosexuals are predators of young and teenaged boys,’ wrote the editor-in-chief, Russell Vellos. ‘Woe unto us, Belize, if homosexuals are successful in our court. Woe unto us! In fact, since ours is a ‘test case,’ woe unto the world!’”

We have checked our records, and can say categorically that the entire quote is a lie. No such words appear in our editorial, which begs the question, if The New York Times Magazine can blatantly lie about such a thing to suit their purposes, then the veracity of the entire article has to be questioned.

The puzzle for us is, why would a media entity such as The New York Times Magazine think it necessary to resort to “gutter journalism” in pursuit of its LGBT agenda? We suppose the Amandala was used because it is by far the largest and most influential newspaper in Belize.

I believe any person in their right sense is disturbed by these news of little children being sexually abused in Belize. Anyone sexually assaulted,...
Read more
Opinion

Right to the Point: A NATIONAL DISGRACE

I have had time to reflect on the series of cases in my beloved Belize that are a national disgrace, and in my book...
Read more
- Advertisment -