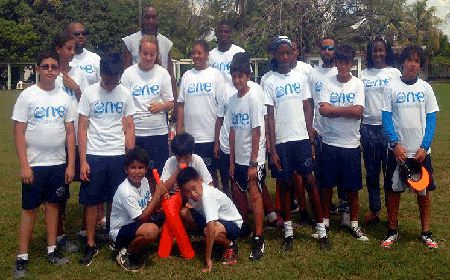 BELMOPAN, BELIZE, Thurs. Apr. 7, 2016–On Wednesday, April 6, One Young World Ambassadors, in collaboration with the Belize National Cricket Association and the University of Belize Sports and Recreation Department, hosted Belmopan Cricket Day at the Governor General Field in Belmopan.

One Young World is a UK-based charity dedicated to empowering young leaders, with over 7, 000 ambassadors across 196 countries. The idea of Cricket Day came about at the 2015 One Young World Summit in Bangkok, when Laureus Sport Ambassador and former Australian cricket captain Steve Waugh joined Kate Robertson (One Young World Co-Founder) on stage to discuss the role of sport in development. Together, they vowed to do what they could to make noise about the legendary cricketers that were once the West Indies team. And on April 6, the UN International Day of Sport for Development and Peace, One Young World Ambassadors from 8 different countries in Central America and the Caribbean delivered on that commitment.

In Belmopan, 14 students from the Belize Christian Academy learned how to play the sport under the guidance of Mr. Conway Young, Cricket Development Officer at the Belize National Cricket Association, and Mr. Claude Jones, University of Belize Coach. The event was also made possible through the assistance of volunteers and the kind sponsorship of the Caribbean Youth Environmental Network (Belize) and James Brodie & Co. Ltd. (Belmopan Branch).

Belmopan Cricket Day expects to be a catalyst for similar cricket activities in Belmopan and across the country of Belize.