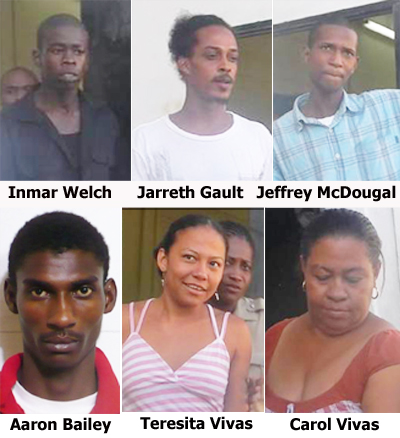 A composite patrol of police and BDF soldiers operating out of the Mesop Substation on Dean Street has captured four men and two guns, including the highly prohibited 357 Magnum revolver, along with the loot from the robbery of Paula’s Store on Cemetery Road on Thursday, August 23.

Paula Chen, of a Cemetery Road address, told police that around 2:20 p.m. on Thursday, August 23, whilst at her business place, Paula’s Store, serving a customer, three men who were armed with firearms entered her store.

One of the armed thieves walked towards her, pointed the gun at her face and demanded money. He then went behind her counter, opened her cash register and stole an undisclosed amount of cash, while the other robbers proceeded to rob the customers in the store of their personal belongings.

Police say that Aaron Bailey, 23, a cabinetmaker of Racoon Street; Inmar Welch, 21, a fisherman of King Street; Jeffrey McDougal, 22, a construction worker of Plues Street; and Jarreth Gault, 27, a musician of Euphrates Avenue, are allegedly the men who entered Paula’s Store and robbed her and her customers at gunpoint.

The four men were captured while hiding in a house on Plues Street. In the house police also found Teresita Vivas, 24, and her mother, Carol Vivas, 47. Police said that the women were in the house at the time of the search when the men and the firearms and ammunitions were found.

Police said that around 3:30 p.m. on Thursday, August 23, they were on anti-crimes patrol in the George and Plues Streets area when they were alerted that a robbery had taken place on Cemetery Road, and that the four robbers had escaped into the area.

They said that they reacted immediately and cordoned off the area and searched a house on Plues Street, which is in an area known to them as a place where criminals hide out. They found the four men and the two women, a cell phone, $495 in cash and an unlicensed .38 Special revolver loaded with four .38 rounds and a .357 Magnum revolver loaded with 6 .38 Special rounds. The six people were arrested and taken to the Queen Street Police Station, where they were charged with the offences.

Police said that there are several houses in the area that are used by criminals as hiding places.

However, the residents of the area said that the men were tasered and brutalized, and that the GSU were merciless on the men when they were being arrested and the house searched. A witness told Amandala that the GSU took off the men’s clothes in the course of the beating and tasering to which they subjected them.

When questioned by Amandala, the police strongly denied the allegations, saying that it was the Business Watch Unit that responded to the robbery alert, and officers in the unit do not carry tasers.

Also, in response to the claims of brutality by the witnesses, Yearwood said that there were no signs of violence when the men were detained, and they were examined specifically because the residents of Plues Street were shouting accusations about brutality. He also confirmed that none of the officers from the operation carried tasers, because they are not authorized to use them.

This afternoon, Aaron Bailey, Inmar Welch, Jeffery McDougal, Jarreth Gault, Teresita Vivas, and her mother Carol Vivas, were taken before Magistrate Aretha Ford and slapped with multiple firearm offense charges and charges for handling stolen goods. The males of the group were additionally charged with robbery.

Bailey, Welch, McDougal and Gault were additionally charged with robbery for the incident on Thursday.

All six pleaded not guilty to the charges, but due to the nature of the offenses, Magistrate Ford was unable to offer them bail and they were remanded to prison until October 2, 2012, the date of their next court appearance.