Acquitted of killing South Side Gang leader, Nicholi Rhys is charged with harm 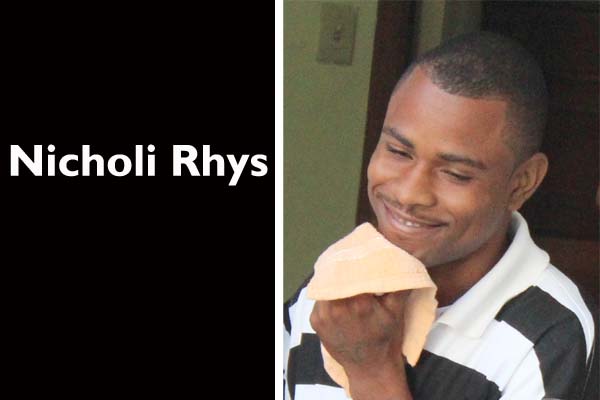 On February 15 of this year, Nicholi Rhys, 22, was acquitted of killing gang boss Andre Trapp, but today, he was back before the court on a charge of harm.

According to police, they investigated a report made by Shantel Waight, a resident of George Street, which occurred yesterday. Although we don’t know what type of injury she sustained, it was classified as harm by the doctor who examined her at the hospital.

Their investigation led to Rhys’s arrest and he appeared before Chief Magistrate Ann Marie Smith unrepresented and pleaded not guilty to the charge. There were objections, but he was offered bail of $500 and one surety of the same amount, with the conditions that he stay away from Waight’s house and workplace, and he must report to the Queen Street Police Station every Monday between 7:00 a.m. and 7:00 p.m.

As mentioned above, Rhys was acquitted earlier this year of killing Andre Trapp, the reputed boss of the South Side Gang, on June 10, 2010. It was a sensational show of bravado, as Trapp was shot and killed on the steps in front of the Magistrate’s Court while the courts in the building had been in session.

Rhys was captured later that same day and was taken to the police station, where he was formally arrested and charged with the murder. Rhys’ trial was heard before the Chief Justice Kenneth Benjamin, and it was a trial without a jury.

After hearing both sides present their cases, the Chief Justice ruled in favor of Rhys after his lawyer, Simeon Sampson, argued that the police officer who claimed to see Rhys’ face for 2 to 3 seconds after he exited a pickup from which shots had been fired, failed to mention so while he was being interviewed by the investigating officer.

There was no identification parade held either, and according to Sampson, this caused reasonable doubt in the Crown’s case, which eventually led to the acquittal.