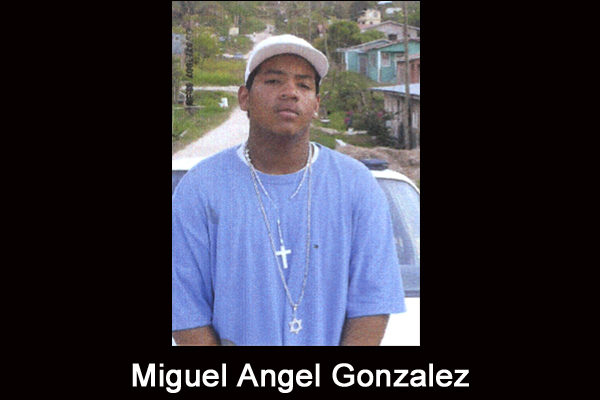 A resident of Benque Viejo del Carmen who had gone over to the bordering Guatemalan town of Melchor De Mencos was found in that town yesterday morning around 8:30 a.m, in an area called Santa Elena Melchor, with his throat slashed; he had also been beaten in the face.

Benque police and the family of Miguel Angel Gonzalez, 23, travelled to the area to recover his body. He was buried around 3:00 p.m. in the Benque Town Cemetery after funeral services at the Mount Carmel Church. The ceremony was conducted by Father John Robinson, while the readings were conducted by Vicky Arceo and Martin Lindo, Jr.

Gonzalez’s sister, Marleni, told Amandala that they were at home around 8:30 a.m. yesterday when they received a call that something had happened to her brother in Melchor. They alerted the police, who travelled to Santa Elena Melchor with them. She identified him to the police and they were given permission to bring him to Belize.

They are at a loss as to what led to his death. Marleni said that Gonzalez was employed as a driver at Vega Distributors, and they are not sure what time he went to Melchor on Saturday. She was told that he went over with two friends of his, but around 8:30 p.m., one of his friends returned and told them that he, Gonzalez, refused to come.

The other friend has not yet been located.

Assistant Superintendent of Police, Dinsdale Thompson, the Commanding Officer of Benque Police, said that he received a call from the Melchor Police Commander that a Belizean had been found dead in his town.

An investigation has been launched in Melchor to find out who killed Gonzalez, and what happened.

Miguel Angel Gonzalez is survived by his parents, Miguel, Sr. and Elma; three sisters, and Emil, his brother. He is also survived by a host of other relatives and friends.