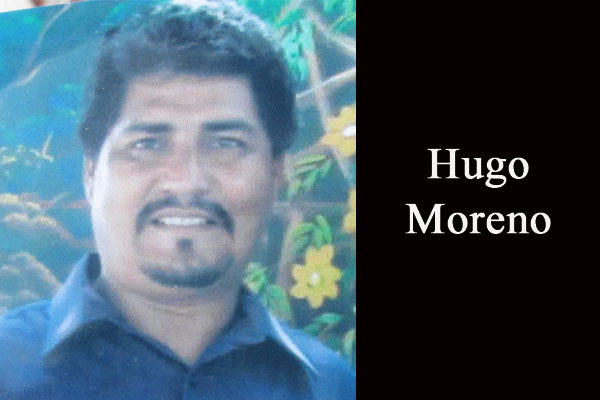 What is believed to be the charred remains of Hugo Moreno, 42, a missing taxi driver of Sittee Street, Orange Walk Town, was buried today at the Orange Walk Town Cemetery.

Although police could not positively identify the body, the Moreno family is confident that the remains, which were severely burnt beyond recognition, were those of their loved one.

The funeral began at about 10:00 this morning at the La Immaculada Catholic Church. A moderate-sized crowd attended, along with about 25 taxi cabs which drove in the procession that escorted the remains from the church to the cemetery.

The Moreno family said that they last saw Hugo at about 11:30 Saturday night, July 27, when he left home to go to the People’s Stadium where the Fiesta Rama was taking place, to run his taxi cab. The last communication from him was at about 1:30 Sunday morning, July 28, after which he was not heard from, despite their best efforts to contact him.

Moreno failed to reach home that Sunday night, and Magda Moreno, his wife who had been with him for about 19 years, said that such actions were out of character for him.

When Moreno still had not returned home on Sunday afternoon, and no indication was received of his whereabouts throughout that day, Magda knew something was terribly wrong and reported her husband missing to police.

On Monday, Orange Walk police and others began to search for him, but he was not found until Tuesday afternoon shortly before 2 o’clock, by people in the Carmelita Village area, who saw a car that was completely destroyed by fire. In the trunk of the vehicle was Moreno, whose upper body was burnt beyond recognition.

Police recovered the charred remains of the body and took it to the Orange Walk Hospital. It was later taken to the Karl Heusner Memorial Hospital, on Wednesday, July 31, where at 2:00 that afternoon an autopsy was carried out to certify the cause of death and to establish the identity of the remains.

According to Dr. Mario Estradabran, the police pathologist, however, the findings were inconclusive in both areas. The corpse could not be positively identified, and the cause of death could not be ascertained. Police, therefore, cannot say how Moreno was killed.

The police, however, have taken a sample from the corpse, and handed it over to the Department of Forensics to carry out DNA procedures to get a positive identification, but the family is confident that the corpse is that of Moreno.

The positive identification of Moreno using forensic procedures will give the family closure, said police.

The family is at a loss as to the reason why Moreno was killed, although Magda Moreno believes that robbery could have been a motive, because he was in possession of about $500.

Police have announced that Assistant Inspector Julius Cantun is the chief investigator of the case. AIP Cantun said that they are following several leads, but are also seeking the assistance of the public to help them solve the case, and he urges any individuals who have information that can help solve the case to come forward.