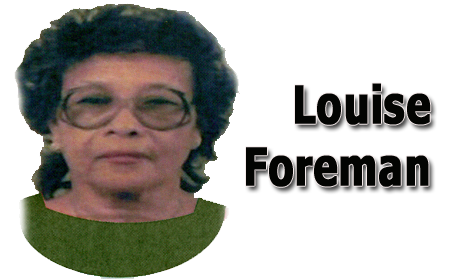 BELIZE CITY, Mon. Feb. 13, 2017–The body of Louise Foreman was buried twice. She was initially buried in a tomb in Lord Ridge Cemetery prior to burial services this Saturday afternoon. After the ceremony in the cemetery, the tomb was closed and concrete was poured onto the cover to seal the tomb. The priest and most attendees left, since the funeral services had been concluded.

However, Foreman’s daughter began to search for the headstone of her brother (Louise Foreman’s son), Victor Andrew Foreman, who died in August 1998, and into whose tomb her mother was to have been buried. About 40 feet from where her mother had just been buried, she found her brother’s tomb, and it was intact.

It was then that she realized that her mother had been buried in the wrong tomb, and not in Victor’s tomb, as the family had intended.

The headstone of the tomb where her mother was buried was found, and the person whose remains were in that tomb was no family relation. 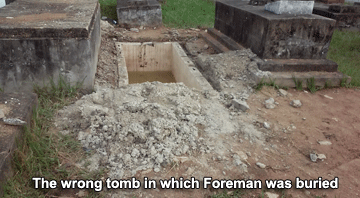 Family members of Foreman who were still at the tomb became very upset when they learned of the mistake, and since the concrete that encased the tomb was still soft, the tomb workers, who were still present, quickly removed it and the casket was taken out and taken back to the hearse and returned to the morgue.

On Sunday morning, Foreman’s body was brought back to the cemetery and she was again buried, this time with her deceased son. Today, a mason was putting on the final touches on the tomb.

City Council workers at the cemetery administration office told us that, while preparing the tomb into which Foreman was initially buried, they saw bones being taken out of the tomb, put in a sack and taken away.

They said that the undertaker must now bring back the bones and reburial must take place and the tomb resealed, since the person to whom the remains belong has loved ones, and that they will not be pleased about the opening of the tomb and the removal of the bones.

We checked with the undertaker to find out what could have caused the major error, and he told us that he would be meeting with the City Council’s attorney at 2:00 tomorrow afternoon, and therefore could not comment. An official of the City Council was supposed to offer comment this evening, but that has so far not occurred.

At the cemetery, tomb workers had told us that the mistake was made by a family member of Foreman who identified the tomb where Foreman was to be buried. The family was contacted to verify the tomb to be used for the burial. The workers declared that the cemetery administration was not to be blamed for the confusion, and they are also expecting that the undertaker will repair the tomb that was mistakenly opened.

However, a family friend of Foreman strongly disputes this claim, and many are still wondering how the mistake could have been made when Foreman’s daughter showed workers the tomb of her brother, and the name on the tombstone was bold and legible.