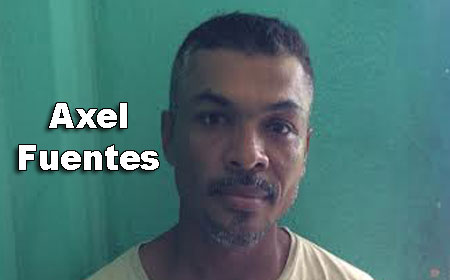 ORANGE WALK TOWN–Axel Fuentes, 36, a Guatemalan who resides in Ranchito in the Corozal District, was remanded to prison until October 29 when he appeared this afternoon in the Orange Walk Magistrate’s Court after police busted him at about 8:30 last night with over 40 pounds of pure cocaine, valued at about $12.3 million dollars.

Police said that they and Orange Walk District Customs officials had been operating a vehicle checkpoint between Miles 56 and 57 on the Philip Goldson Highway when they stopped a Toyota pickup driven by Fuentes, a Guatemalan/Belizean of Ranchito Village and searched for contraband goods.

Police reportedly found an icebox in the vehicle pan. The icebox was opened and the officers saw fish in the box. The fish were all taken out and police found another covering, and when that was removed, they found cocaine underneath, which, when weighed, amounted to 19 kilograms, or 41 pounds.

The driver of the truck, who was alone in the vehicle, was immediately arrested and taken to the Orange Walk Police Station, where he was charged with drug trafficking.

He was taken to the Orange Walk Magistrate’s Court this morning, where he was arraigned for the charge and remanded to the prison.

A pound of cocaine, according to online information, costs US$9,000 in Colombia, and US$27,000 in the United States.

Once in the United States, the cocaine is cut (diluted) five or six times, and is worth about US$150,000 per pound when finally sold on the street, giving a value of over BZ$12.3 million for the 41 pounds of the drug found in the truck.