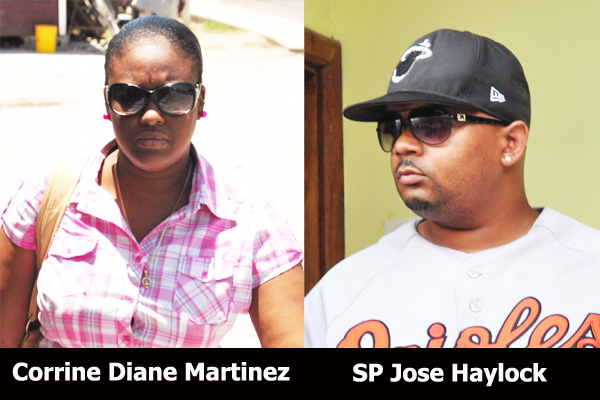 A Police Special Constable, Jose Haylock, who was on trial for possession of an unlicensed firearm and ammunition, was sentenced to five years in prison on Friday after he changed his not guilty plea to guilty when the prosecution presented video evidence linking him to the firearm and ammunition that police found at his home.

Haylock’s live-in girlfriend was also charged with the same offences. But there was no evidence that she had knowledge of his illegal stash, so Chief Magistrate Ann Marie Smith dismissed the charges against her, after their attorney Arthur Saldivar made a no case to answer submission on her behalf.

Jose Haylock and his common-law wife, Corrine Diane Martinez, were charged after a Gang Suppression Unit search of their home at 3716 Louise Bevans Street on the evening of February 11, 2012, resulted in the discovery of a .22 pistol loaded with ten rounds, and eleven .9mm rounds, for which Haylock could not produce a license. He was consequently charged with one count of possession of a firearm without a license and two counts of possession of ammunition without a license.

Martinez was not present when the police conducted their search. The GSU, however, went to her place of employment and arrested her after their search confirmed that she resided at the address.

The case was prosecuted by Crown Counsel Kayshia Grant, who had tried to make the case against Martinez stick by citing the 2008 Amendment to the Firearms Act, which addresses joint possession.

“A person is deemed to be in possession of a firearm if he is an ordinary resident at the location where the firearm was found,” Grant submitted.

Jose Haylock has now become the first member of the Police Department to be sentenced to prison after the case of the Police’s Special Branch Corporal, Gino Peck, whose conviction for a similar infraction of the Firearms Act resulted in a small fine and no prison time.

At Peck’s mitigation hearing, in which the Commissioner of Police Allen Whylie was a character witness, the Director of Public Prosecution suggested to his defense attorneys that they could cite Section 54 of the Summary Jurisdictions Procedures Act to avoid sending him to prison, so the court imposed a fine instead of the mandatory custodial sentence that is prescribed by the various amendments to the Firearms Act.

But when DPP Cheryl-Lynn Vidal made the suggestion about the section of the Summary Jurisdictions Procedures Act, she also cautioned the court that she had not yet researched it.

In his mitigation plea on behalf of Haylock, Saldivar had “urged the court to consider the precedent set in the Gino Peck case.”

But in reply, Grant submitted: “Section 54 does not apply in this case. Even though this matter is being tried summarily, it is an indictable offense. Heavy reliance is being placed on the Gino Peck’s case, where Section 54 was erroneously used. Precedents are not set in errors of law.”

The defense case began to unravel when Grant moved to get the GSU video of the search of Haylock’s house admitted into evidence.

Saldivar objected, telling the court that the prosecutor was attempting to ambush the defense with new evidence. But the Chief Magistrate pointed out to him that the video was nothing new and that he had not tried hard enough to get his hand on a copy of it. She ruled to admit the prosecution’s video evidence.

After the pistol was found in his house, the GSU video depicted the pleading Special Constable saying, “Please give me a run. Dem bally wan kill me.” Haylock was referring to the gangs in the Jane Usher Boulevard area, which is a stone’s throw away from his Louise Bevans address.

“You give the street guys a run. Give me a run,” Haylock pleaded to the five GSU officers present when his illegal gun and bullets were discovered.

This revelation that torpedoed the defense’s case came about 12 minutes into the one and a half hour video.

At this point, the defense asked for an adjournment and Saldivar went outside to confer with his two clients.

At the resumption of the hearing, Saldivar, in a somber mood, told the court, “in light of the evidence from the video and that being corroborated by what was said in court, I have advised my client to change his plea.”

During another 10-minute adjournment, Haylock went outside and could be heard communicating with friends and family on his cellphone. He told someone to come for his car from the court, because there was a strong possibility he would be going to jail.

Shortly before 5:00 p.m., a police mobile pulled up outside the courthouse and began waiting for the convicted cop they were tasked to transport to the Belize Central Prison.

In passing sentence, the Chief Magistrate told Haylock that all along he knew that he was guilty and wasted the court’s time for over two years, so his guilty plea is not helpful to him.

She told him that he represents a danger to society and that his case is different from the Gino Peck case, because he (Haylock) kept the gun and ammunition for himself.

During the police’s search of Haylock’s house, the loaded .22 pistol was found in a sofa under some cushions, while the remaining 11 rounds of .9 mm rounds were found in a purse belonging to his girlfriend, Martinez. The purse was inside a chest of drawers in the bedroom.

Haylock was sentenced to five years for each of the three charges, but Smith stipulated that his sentences are to run concurrently. This means that he will only serve five years in prison. As the Firearms Act now stands, five years is the minimum sentence upon conviction for a firearm and or ammunition conviction.