Fragmentary grenade found in the City 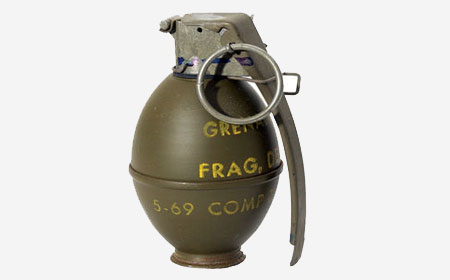 BELIZE CITY–Precinct 2 police are carrying out an investigation to determine the source of a British-made fragmentary grenade that was found in an abandoned house on Banak Street in the south-side of Belize City.

Police said that at about 1:30 Saturday afternoon, while on an anti-crime operation in the Banak Street area, they searched an abandoned building and found the grenade.

The building was immediately cordoned off and an explosives expert from the BDF was called in, who successfully recovered the grenade without incident.

The grenade was labeled as found property and will be destroyed.

Grenades are designed to explode into hundreds/thousands of little pieces of metal that rip apart those who are in their vicinity, due to the shrapnel which make up the outside of the grenade.

The fragmentary grenade is widely used in war to inflict massive damages to the enemy in an enclosed area.

The old house in which the grenade was found is regularly used to hide marijuana and handguns, said police.