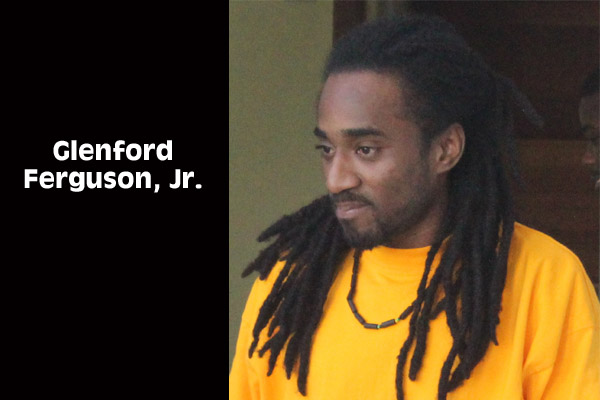 Ferguson has already spent 7 years in prison; his 15 years sentence makes a total of 22 years

After listening to mitigation pleas from four persons, Supreme Court Justice John Gonzalez adjourned the mitigation hearing for 10 minutes, and when he returned, he imposed a 15-year sentence on Glenford Ferguson, Jr., who was convicted of manslaughter on February 6 for the stabbing death of Koffi Beeks.

Ferguson, who was initially charged with murder, spoke first at his mitigation hearing, telling the court that he knows he has done wrong, but pleaded for another chance to be with his family.

“I have never been in a situation like this before, and I am really sorry,” Ferguson told the court; “I like to say I apologize to the family, Your Honor.”

Ferguson’s brief statement was followed by the four character witnesses who also spoke briefly, but all appealed for leniency on his behalf.

His father, Glenford Ferguson, Sr., testified that he was “not a trouble child.”

“I never had no trouble with him” his father went on. “I ask the court to please be lenient on him.”

Grace Augustine, a resident of Ladyville, testified that she has known Ferguson since he was a baby, and, “I want to ask the court to please give him another chance.”

Another witness, Anna Franklin, got to know Ferguson since he has been on remand for the murder of Beeks.

Franklin described Ferguson as “a genuine person” and “I just want him to get a second chance.”

Public Officer Mary Guzman told the court that she has known him for one year and that “he is a very nice person.”

In considering the 15-year sentence, Justice Gonzalez told Ferguson that his character witnesses spoke well of him, and that he is also taking into consideration the fact that he has no previous record.

The judge also said that he has also taken into consideration the current sentences the courts in Belize are imposing.

“There is a leaning to pass sentences of 15 years,” Justice Gonzalez explained, “so I have wide latitude to move around, so as to find the most fair sentence.”

Justice Gonzalez also noted: There is too much killing by young people, for no good reason. The altercation was over a red rag. It makes no sense.”

“After having considered all that has been placed before me, I think that a sentence of 15 years is fair,” Justice Gonzalez continued, “I therefore sentence you to 15 years, to take effect from today’s date.”

Ferguson was charged with the February 2007 murder of Koffi Beeks, which occurred in Ladyville in the vicinity of Mel’s Cool Spot.

Ferguson, according to the testimony of the prosecution’s key witness, gave Beeks a bear hug and then stabbed him in the neck with a pen knife. Beeks died from a loss of blood while being operated on at the Karl Heusner Memorial Hospital Emergency Room.

Attorney Bryan Neal, who was successful in defending Ferguson from the murder charge, told Amandala, after today’s sentencing, that it was a difficult case for him from the beginning, because his client had given a caution statement to police, admitting that he had done the stabbing.

“Once the jury saw the confession statement, there was no way for my client to say that he wasn’t there,” Neal explained, “So we had to focus on the mitigating circumstances and use other defenses, such as self-defense.

Neal added that he will look at the sentencing guidelines that he presented to the court and see if there is any way that he could appeal it.

The Crown’s case was presented by Crown Counsel Sheiniza Smith.