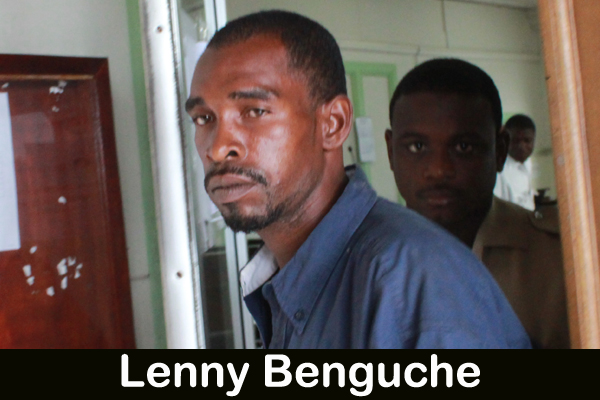 After the court amended the indictment to reflect the accused man’s given birth name, Supreme Court Justice John Gonzalez signaled that he was ready to let the jury into the courtroom to hear its verdict in the trial of Lenny Benguche, who has been using a number of aliases in the past, and who had been indicted for maim.

The foreman of the nine-member jury of 5 women and four men, who had been in deliberation for over four hours, indicated that they had reached a unanimous guilty verdict.

Benguche, who was unrepresented at the trial which began on Monday, decided to exercise the option of a mitigation hearing before Justice Gonzalez passes sentence on him on Friday, February 28.

The incident which led to the maim occurred on January 28, 2008, in Ladyville when Benguche shot his ex-girlfriend, Christina Zetina, behind her thigh, and as a consequence, the leg had to be amputated.

He was indicted on charges of attempted murder and maim, but when his case came up in the Supreme Court of Justice Herbert Lord, a jury of nine found him not guilty of attempted murder. The jury, however, was deadlocked on the maim indictment, leading to his new trial.

According to the evidence presented at the trial by the prosecution’s two key witnesses, Christina Zetina and her “new common-law husband, Kareem Young,” which Justice Gonzalez said was consistent when he summarized the evidence for the jury, Zetina told the police that around 8:30 p.m., she and Kareem Young were riding beach cruiser bicycles.

In recounting the incident, Zetina had said, “I was riding a black beach cruiser bicycle while Kareem Young rode a blue beach cruiser bicycle with his mother on the bars, as he headed towards her work to drop her off. While on our way to do so, I saw my ex-common-law husband, Lenny Benguche, at the Chinese shop in the Japan area.

“Upon reaching Young’s mother’s work-place, he dropped her off and then we left. As we headed home and reached Quilter Avenue, I saw Lenny Benguche walking in front of us in our direction. As we rode past him, I heard a gunshot and I began to ride faster. Then, I heard another shot, and then I felt a burning sensation in my left leg. That’s when I realized that I was shot, because I was not able to ride my bicycle anymore, and that caused me to fall to the ground.

“After being shot, I look around and saw Bennett holding a black firearm with both his hands. After I was shot, I heard two more shots.

In his defense, Benguche, who gave evidence from the witness stand, placing himself not too far from where the shooting occurred, told the court that on the day in question, at about 8:30 p.m., he was at a Chinese shop on Marage Road, and that while there, he heard a shot. He said he then checked the time and saw that it was around 9:00 p.m., and he decided to go home.

On his way home, he stopped at another Chinese shop and bought a fried chicken. The next day he went to Corozal. He claimed that he was not at the crime scene.

When the case opened on Monday morning, Benguche told Justice Gonzalez that he was not ready to start the trial, because he had just come out of police custody and that his constitutional rights had been violated. He wanted to go home for a change of clothes, he said.

But Justice Gonzalez told him the court was ready to proceed and declared, “I will accept you as you are now.”