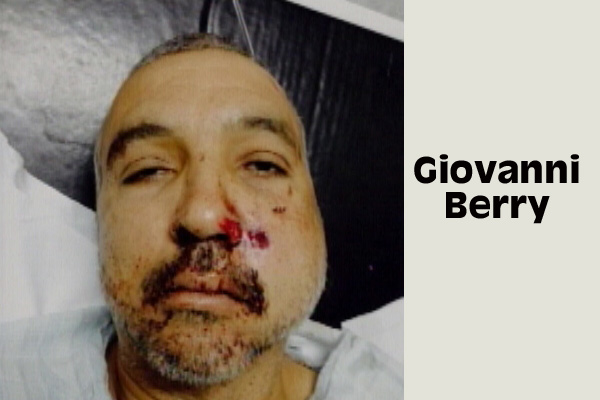 43-year-old says he was attacked by a “vigilante” mob

Earlier this week, we reported on a shooting which had taken place in Burrell Boom whilewherewhen a mob of villagers were in pursuit of a thief or thieves who had burglarized the home of Chad Gillett.

Based on information we had received at the time, we were told that it was a fellow resident of Burrell Boom who was shot; however, Amandala understands that the shooting victim was 43-year-old Belize City resident, Giovanni Berry.

Berry was reportedly in the village working on a newly built house and had decided to bunk for the overnight, but he ended up in the wrong place at the wrong time when he was caught in the middle of a horrifying ordeal and woke up to the nightmare of a hail of gunfire in his direction, allegedly by a vigilante group.

The unsuspecting victim was fortunate to be alive after he was hit once in the left side of his face by one of about 60 rounds that were fired, and today Amandala got Berry’s first-hand account of what took place.

He told us that he was innocently terrorized while trying to make a hard-earned, honest living.

Berry, a lifelong painter, recounted the series of events leading up to his unfortunate injury which he suffered just before dawn last Saturday, March 1. He explained that he was working on a newly built bungalow house in Burrell Boom and decided to spend the night on the floor of one of the rooms – oblivious to the fate that awaited him just hours later.

Berry said, “Everything was going good until about 3:00 a.m. when I heard a commotion in the neighborhood. I went back to sleep until about 5:00 a.m., when I was awakened by noises that sounded like voices that were hollering. When I got up, I saw flashlights and heard people walking around.”

According to Berry, he then heard a banging at the door of the house where he was staying, followed by demands that left him perplexed and fearful.

“Get out of the house now or else we are coming in there after you!” Berry cited, narrating the shouts of an angry mob that stood outside believing that the culprits that they were seeking were hiding inside.

Berry declared that he saw a bright light being spotted in his direction, which was followed by a single shotgun blast. One of the pellets penetrated his left jaw and exited near his left ear.

In an effort to protect himself from further injury, Berry explained that he grabbed his licensed .38 special pistol and fired one round back in the direction of his attackers, trying to ward them off – but that was a decision that certainly did not work out in his favor.

“All hell broke loose after that”, Berry stated, “The group unleashed a barrage of bullets into the house, damaging some of the windows and the walls. At that time, I was severely traumatized because I was bleeding profusely, so I took out my phone and tried to call 911.”

Terrified, Berry told us that he managed to get a response after 3 attempts, after which the operator gave his number to the Officer in Charge of the village, who then contacted him.

Although there are claims that police officers were along with the group of shooters, Berry said that at no time did anyone identify himself as an officer of the law.

He believes that he was innocently targeted by a group of “vigilantes” who were on a mission to draw blood by any means necessary.

He said, “I was a victim of a horrific act of violence and not a single person has contacted me to even offer an apology.”

Presently, Berry is recovering at home in a stable condition, but he said that he knows that it will be a long, drawn-out process to full recovery.

The shooting victim does not feel that investigators are genuinely doing their part to get to the bottom of the situation, so in a quest for justice, he mentioned that he is seeking legal advice on how to proceed with the matter.

Today, we contacted ASP Chris Noble, Officer in Charge of the Belize Rural Formation, to get an update on the investigations and find out if anyone will be charged for shooting Berry, but all he said was “the case is still under investigation and we are looking into it.”