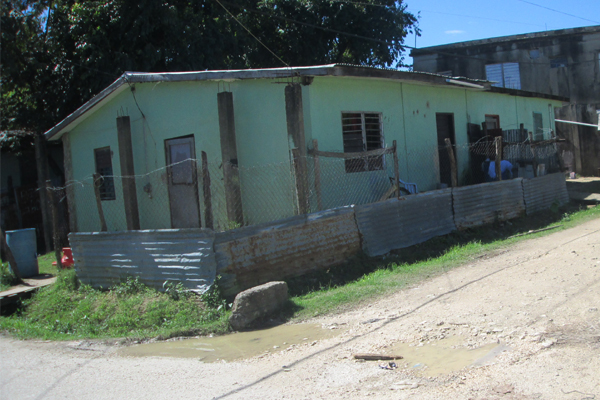 James Elijio, 29, a mentally challenged man who resides at the corner of Flamboyant and Poinsettia Streets, is recovering at the Karl Heusner Memorial Hospital (KHMH) after he was shot in the neck at about 10:30 last night in his yard.

Elijio had come out of the house through a side exit to urinate in the yard when two men walked up from the direction of Casuarina Street and fired at him, hitting him in the neck. The gunmen then escaped in the direction of Black Orchid Street.

Police from the nearby Mahogany Street Police Station responded quickly and took Elijio to the Karl Heusner Memorial Hospital, where he was admitted in a critical but stable condition, and is recovering in the Emergency Care Unit.

One of Elijio’s relatives, who is also his friend, told Amandala that she was at home (they live in the same house) when he went outside in his boxers to urinate, and then she heard gunshots. She looked out to see what was happening, and that was when she saw him on the ground in the yard. She said that the shooting was not expected because Elijio was mentally challenged and was a loner. He did not bother anyone, she said, and he has no enemies that she knows of.

The official police report is that the assailants were two men. One had a dark complexion and low haircut and was about 5’9″ in height and slimly built. He was dressed in a black sweater and a pair of khaki short pants. The other, who was also slimly built, was about 6’ tall and had a fair complexion, and was reportedly dressed in a blue T-shirt and a pair of short khaki cargo pants. Police have since detained one man and are seeking another.

Elijio’s sister, Tanya, said that the shooting of her brother was senseless, and she calls on the gangs and the shooters to put down their guns and stop shooting innocent people.

The motive of the attack is yet unknown.

Word on the street, however, is that James was shot mistakenly, and that he was not the target.

The shooting of James Elijio came after the violent weekend of January 11 and 12 in which 5 people were shot and 3 died, while 2 are recovering from bullet wounds in the Karl Heusner Memorial Hospital.