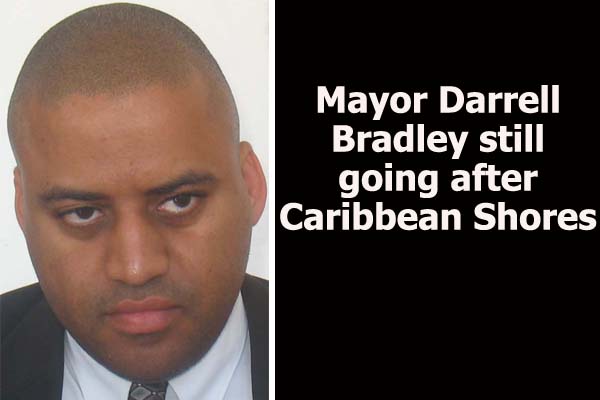 Belize City Mayor Darrell Bradley, 35, may be out of the mayoral race for the 2015 municipal elections, but that is because the mayor seems not to be interested in municipal politics any longer. He is eyeing a seat in Parliament, and he told Amandala today that he is working hard in the Caribbean Shores division to galvanize the popular support he needs to win his party’s divisional convention and capture that seat when general elections are called some years from now.

Speaking with the media on Friday, leader of the United Democratic Party, Prime Minister Dean Barrow, told journalists that it is a pity that Bradley did not submit his name for the mayoral race.

“I still am not sure whether it is because he honestly did not want to stand for reelection, or whether there is more to it than that,” Barrow said.

He spoke highly of Bradley’s work saying, “I will yield to no man in my admiration for his accomplishments, but as one television station said, ‘you never know from one day to the next exactly what the position is.’”

Barrow, who has publicly signaled that Bradley should reenter the mayoral race because that would be a sure win for the party, also acknowledged that some of the Caribbean Shores constituents were feeling “a little bit disgruntled” with the current area rep, Santino Castillo, but he suggested that Castillo had been busy taking care of ministerial duties and could easily get back on a “good footing” with constituents.

Today, Bradley told us that what he needs more than anything is the support of the people in the constituency, and he believes that they are satisfied with his work. He said that he had always worked in that area on the team of former UDP rep, Carlos Perdomo.

Bradley said that he doubts the divisional convention would happen before the municipals, so that means that he is not bothering with the mayoral race.

In any case, according to Barrow, the deadline for Bradley to make his bid for reelection as mayor of Belize, under the UDP’s banner, is closed.

Barrow said of the mayor: “Bradley did a magnificent job, but I believe that we can in fact select a new candidate for mayor who can do an equally good job.”

Bradley told us that he was born and raised a UDP, and he would never run independently.