Micah Tillett, 18, charged with the July 8 murder of Jamal Neal, 21 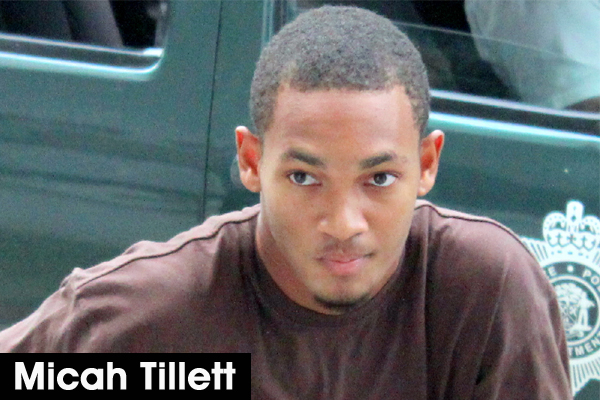 Late this evening, Micah Tillett, 18, a University of Belize student of #639 Tibruce Street, was taken by CIB personnel to court, where he was charged with the murder of Jamal Neal, 21.

Neal was gunned down as he walked down Banak Street on July 8 of this year. At 6:00 that evening, after he had a phone conversation with his mother, two men travelling on a motorcycle rode past him and shot him dead.

Jedd Burgess, 21, a UB student, was previously arraigned for Neal’s murder before Senior Magistrate Sharon Fraser on July 19, while his alleged accomplice remained at large. That was until today, when Tillett was arraigned before Magistrate Hettie Mae Stewart.

Tillett was unrepresented when he appeared in court and the charge was read to him, but due to the nature of the offense, no plea was taken from him, and neither could he be offered bail.

Tillett told the court, however, that he had not been allowed his right to make a phone call, and so his family had no idea that he was being charged with murder, or even where he was, for that matter. Magistrate Stewart then informed the CIB personnel that she would not sign the committal warrant for Tillett until he was allowed to call his family and inform them of what had happened to him.

After Tillett was allowed to make his call, he was remanded to Belize Central Prison, where he and Burgess will remain until his next court hearing scheduled for October 15, 2013.