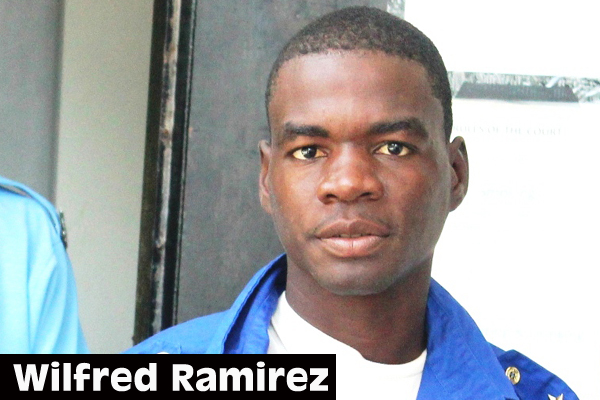 A twenty-one-year-old man who went to the funeral of a murdered friend of his with a sawed-off shotgun was remanded to prison after he was arraigned on charges of “kept prohibited firearm and kept unlicensed ammunition.”

Wilfred Ramirez, 21, a laborer residing at 56 Antelope Street Extension, pleaded not guilty to the two charges.

Police charged Ramirez with one count of kept prohibited firearm, for allegedly having in his possession, one black rusty sawed-off shotgun, an unknown brand which had no serial number. The gun measured 18 inches in length.

He was also charged with kept ammunition without a gun license, for a 12-gauge cartridge that was loaded in the shotgun.

Ramirez appeared before Chief Magistrate Ann Marie Smith, who remanded him to the Belize Central Prison until his next court date on July 23.

The incident occurred on Friday, May 9, when police attempted to search Ramirez while he was at the Lord Ridge Cemetery attending the funeral of Julian Willoughby, who was shot and killed on Antelope Street Extension on Friday, May 2.

Ramirez resisted the police’s attempt to search him, and in the process of resisting the search, the sawed-off shotgun that he had concealed under his clothing fell through the lower leg area of his pants, falling onto the ground in the Lords Ridge Cemetery.

Police, in an effort to prevent retaliation for Willoughby’s murder, posted about a dozen officers to work at the funeral.

But while Ramirez was busted with the sawed-off shot gun, there was no incident of violence at the funeral.