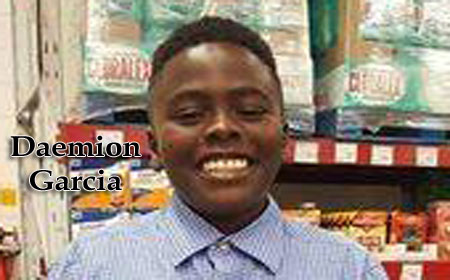 BELIZE CITY, Mon. Sept. 12, 2016–Daemion Garcia, affectionately known as “Dae Dae,” will not be marching up the aisle for primary school graduation this year.

According to family and friends, the 12-year-old standard six student at St. Joseph Primary School was playing basketball on the school’s court when sometime this week, he suddenly fainted and hit his head.

Garcia was admitted to the Karl Heusner Memorial Hospital (KHMH), where he succumbed to his injuries while receiving treatment sometime between Saturday night and Sunday morning.

His mother told Amandala today, Monday, that she believes that it wasn’t the fall that caused his death, but that his “fall was the consequence of other things.”

She told our newspaper that her son had a CAT scan done, which revealed that he had a small hemorrhage, on the left side of the brain, compounded with further swelling.

However, she would not provide further details. Amandala contacted the administration at St. Joseph Primary School, but they declined our requests for an interview.

When Amandala spoke to the coordinator of the Future Warriors Basketball Camp, Jamall Swaso, today, he told us that, “[Garcia] spent the last moments of his life playing the sport he loved the most.”

According to Swaso, Garcia was a promising basketball player who showed commitment every time he stepped on the court.

He recalled urging Garcia to play the game with his “hand and his heart,” and that “pain was weakness leaving the body.”

The Future Warriors Basketball Camp extends its condolences to Garcia’s family, who now await the results of a post-mortem exam.