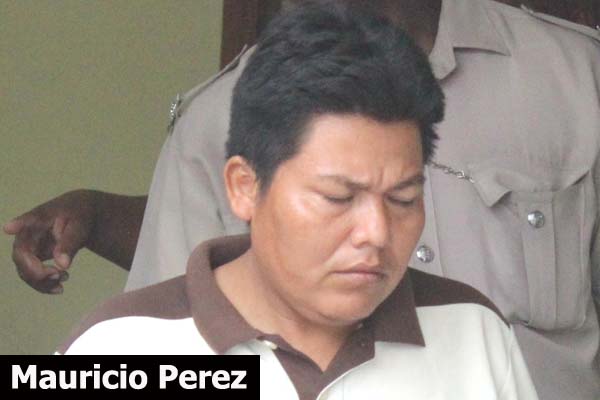 A security guard who has been accused of being in possession of unlicensed ammunition spent a marathon six days in police custody before he was brought before a Magistrate today, Monday, for arraignment, prompting his attorney to make a submission to the court about the violation of his constitutional rights.

For three consecutive days, since police detained him, the family of security guard Mauricio Perez, 34, has been making trips to the Magistrate’s Court in the hopes of seeing him brought to court.

But on Friday, when he was not brought to court, the family decided to seek legal help and retained attorney Nazira Espat-Myles from the law firm of M.H. Chebat and Co.

Police arrested Perez on Tuesday, April 22, on the allegation that he illegally kept a black .9mm magazine with seven rounds — five of a Luger brand and two of an Aguila brand.

He was not given a charge sheet until Friday, April 25. Despite being charged on Friday, however, Perez was not brought to court until today, when he appeared before Chief Magistrate Ann-Marie Smith.

But before she arraigned him on the charge, Espat-Myles made a submission, asking the court to strike out the matter and not read the charge to her client for several reasons, principally, because his constitutional rights were violated.

In his reply to Espat-Myles’ submission, the court prosecutor Sergeant Egbert Castillo told the court that the question of Perez’s constitutional rights and whether or not they had been violated by the police is not a matter for the Magistrate’s Court to decide on, because constitutional rights questions are dealt with at the Supreme Court level.

The Chief Magistrate was of the same view and continued with the arraignment, reading the single charge of “kept ammunition without a gun license.”

Perez pleaded not guilty to the charge and Smith, in accordance with the provisions of the Firearm Act, remanded him to the Belize Central Prison.

Perez is due to return to court on June 17.

According to Espat-Myles, she had anticipated this morning’s ruling at the Magistrate’s Court, but has confirmed that she has been preparing the necessary paperwork to file a claim in the Supreme Court on behalf of Perez.