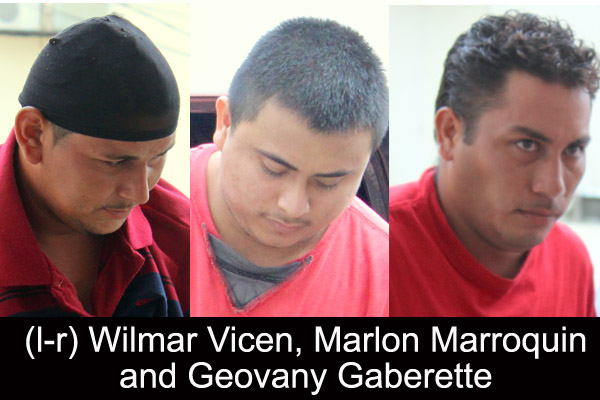 Today, Wilmar Vicen, 24, Marlon Marroquin, 18, and Geovany Gaberette, 29, were taken before Magistrate Hettie Mae Stewart and read a total of five charges. Vicen, a salesman, Marroquin, a bakery assistant, and Gaberette, a laborer, all of whom are residents of Spanish Town, Ladyville, were all charged with wounding Henry Samayoa.

According to police, Samayoa, 27, at 11:00 Saturday night, was heading home with his stepfather when the three men attacked him. The first man hit him with a piece of 2 x 4 lumber on the right side of his head, and he fell to the ground.

While on the ground, Samayoa was hit by the second man with a metal pipe several times on his body, resulting in him suffering a fractured right hand.

After assaulting him, that man then allegedly told him, “I will kill you.”

While Samayoa was still on the ground, the third man then advanced toward him with a machete, but his stepfather was able to save him from the imminent attack and he was able to make a report at the police station.

All the men pleaded not guilty to their offenses and were offered bail, but with certain conditions – Vicen, who is a Honduran with Belizean residency, and Gaberette, who is a Honduran national awaiting his residency, cannot leave the country without first getting permission from the court. The trio cannot be within 100 yards of Samayoa, and they have to report to the Queen Street Police Station every Friday between 7:30 a.m. and 4:30 p.m.