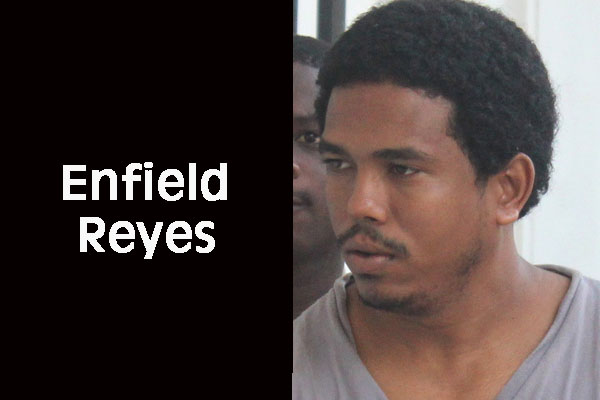 He is charged with aggravated assault

A businessman who has been in police custody since Sunday, when his 29-year-old wife reported to police that he pulled out his licensed firearm and fired a shot which missed her, was remanded to the Belize Central Prison after he pleaded not guilty to a charge of aggravated assault with a firearm.

Enfield Reyes, 31, a businessman of a King Street address, appeared before Chief Magistrate Ann Marie Smith, who remanded him to prison until his next court appearance on June 6.

Reyes is being represented by attorney Ellis Arnold, Senior Counsel.

According to the complaint against Reyes, on Sunday, he became involved in a domestic dispute with his wife at their King Street home, and he allegedly pulled out his licensed firearm and fired a shot at her, but fortunately, he missed.

His wife reported the incident to police and demanded court action. Besides demanding court action, the traumatized wife is also seeking a restraining order against him.

The couple are said to be the parents of a two-year-old daughter, who was at home when the incident occurred.

Reyes runs a grocery store at the corner of King Street and West Canal, while his wife runs a beauty salon on King Street.