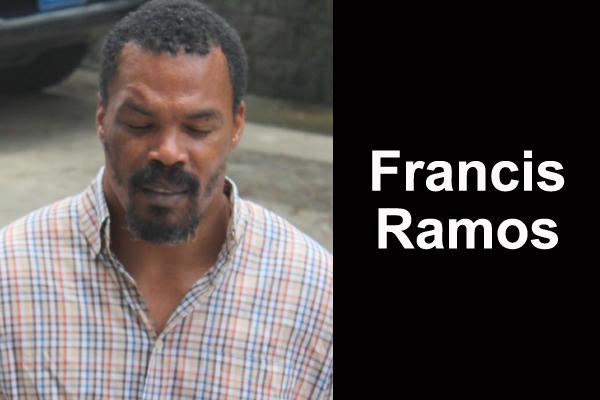 Ramos had changed his plea twice before finally deciding to plead guilty to attempted murder of Michael Young, 33

This morning, Francis Ramos, 38, was sentenced to 7 years in prison after he pleaded guilty to attempting to murder Michael Young, 33, a relative’s boyfriend at the time of the incident.

On July 5, after changing his plea twice, Ramos finally decided to plead guilty after he was positively identified by the victim and main witness, Young.

Young testified that he was in the living room of the house located on Banak Street, when his stepchildren asked him for money to go to the shop. When he got up to get the money, Ramos allegedly grabbed a knife and stabbed him three times, once in the left side of the chest, before Young managed to kick him and avoid further injury.

After Young’s testimony, Ramos changed his plea to guilty and the judge then stopped the trial and adjourned the court to July 18, when Ramos would be sentenced.

But last Thursday, Ramos’ character witness did not appear in court and only he, Ramos, was given an opportunity to speak.

In his mitigation plea, Ramos asked that the court give him the shortest possible prison sentence and that the two years and three months that he has been on remand be included in the sentence. Ramos was given until today to present his witness, but no witness appeared on his behalf, and Justice John “Troadio” Gonzalez then sentenced him.

The Justice took into consideration that Ramos had already been remanded for two years and sentenced him to 7 years in prison for attempting to murder Young, effective today.