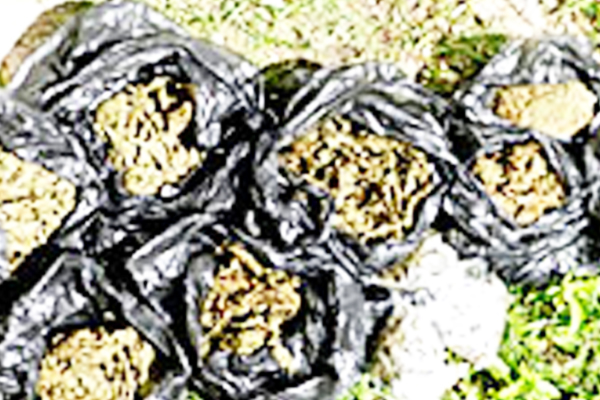 A total of over 3,600 grams of marijuana has been discovered and confiscated by police.

The newly formed MIT unit of the police, along with the K9 unit, were conducting an anti-drug operation on the Hummingbird Highway about 5:00 yesterday evening, when they conducted a random search in an abandoned lot in Alta Vista Village and found a trash bag loaded with marijuana, which, when weighed, amounted to 1,484 grams. No one was in the area at the time and no one was arrested.

The drug has been labeled as found property, and will be handed over for destruction by fire.

The GSU, also in the course of anti-drug operations in Belize City, confiscated about 2,150 grams of marijuana. The unit reported that they began their operation about 11:30 Friday morning and conducted searches in the Dyke area of Fabers Road Extension which led to the discovery of 5 black plastic bags which contained a total of 871 grams – or almost 2 pounds – of marijuana. No one was in the area, and so the drugs, which the GSU believes is the property of a drug peddler from that area, was labeled as found property, and confiscated.

In another operation on Saturday afternoon at around 1:30 p.m., the GSU were in operation on Linda Vista Street in the Lake Independence area when they searched an abandoned lot and found 233 grams of marijuana inside a black plastic bag hidden among some plantain trees. No one was in the area, and so the drugs were labeled as found property. The GSU believes that it belonged to a known drug dealer who operates in the area and resides near the abandoned lot.

Yesterday, about midday, the GSU on an operation in the Conch Shell Bay area, searched under a house, where they found 8 black plastic bags and 3 transparent plastic bags all containing marijuana which totaled 1,046 grams or about 2 pounds and 4 ounces in weight. No one could be linked to the drugs, which were was labeled as found property.

All the marijuana which was discovered is to be destroyed.