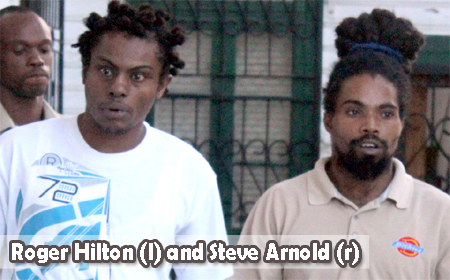 BELIZE CITY, Tues. Oct. 27, 2015–Two Ladyville men, who were remanded to prison when they were arraigned on a charge of attempted robbery, will not come out of prison anytime soon because this afternoon Chief Magistrate Ann Marie Smith found them guilty and imposed the minimum sentence of 7 years for the offense.

Roger Hilton, 27, and Steve Arnold, 32, gained nothing from their attempted robbery of Ian Alexander Holland on May 10, 2015, other than that time, they will now have to spend time behind bars, for attempting to rob a man they have known for over 20 years.

In finding them guilty, the Chief Magistrate told the two that the version of events they gave to the court sounded like a fairy tale.

And nothing that they said in court could discredit the witnesses for the prosecution, who had given overwhelming evidence against them.

Since both men have been on remand, Smith deducted the 5 months that they had already served; so there remains 6 years and 7 months of their sentence for them to serve.

During the trial, at which neither men had an attorney, they had given conflicting evidence, and to compound this, when Holland was on the witness stand testifying to what had happened when the two accused attempted to rob him, Arnold asked Holland to forgive him for what he (Arnold) had done to him.

Not certain of what they were hearing, both the Chief Magistrate and the court prosecutor asked Arnold if he was accepting responsibility for what he had done, and if he wanted to change his not guilty plea to guilty.

Arnold, however, told the court that he was innocent.

Additionally, Arnold was found to be lying when he admitted that he did punch Holland in the mouth, but claimed that he was parting a fight and that the punch was accidental.

On the evening of May 10, 2015, Holland went to a Chinese grocery shop to buy milk, when Hilton and Arnold approached him.

Holland said that the two demanded that he hand over his money, and they began to search his pocket. Arnold then punched him in the mouth, and Hilton pulled out a pair of scissors from his right front pocket and stabbed him in the chest.

Hilton and Arnold, after the scuffle with Holland, got on their bicycles and rode off. They did not get very far before they were intercepted by police at the junction of Lord’s Bank Road and the Philip Goldson Highway.

Police Constable Elisar Cobb, who responded to the report of the stabbing, searched the two and found the pair of scissors with which Holland had been stabbed, in Hilton’s pocket.

In his defense, Hilton admitted to being at the shop, but told the court he merely asked Holland when he would pay the money that he owed his aunt.

Hilton said that at no time did he demand any money from Holland, nor did he search his pocket to rob him.

Hilton claimed that Holland fabricated the story against him and the police officer who testified to finding the scissors in his pocket also fabricated that story about him.