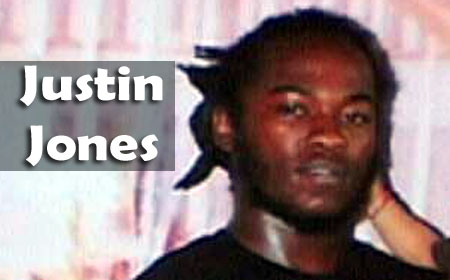 BELMOPAN, Mon. Feb. 16, 2015–Godwin Santos, 43, a construction worker of Ontario, Cayo District, will spend the rest of his life behind bars for the murder of Justin Jones, 22, who was killed in the said village in late 2010.

The case went to trial two weeks ago, and climaxed last Friday in the Belmopan Supreme Court with the conviction of Santos, who was given a life sentence by Justice Antoinette Moore.

After the ruling, the victim’s family was relieved at the notion that justice, in their eyes, was served, and Jones’ mother-in-law, Joan Sutherland, expressed gratitude that they have gotten some sort of closure in the matter at a time when “we hardly get justice in Belize.”

Lisa Sutherland, Jones’ common-law wife, who had witnessed his unfortunate death, testified in court as a witness, and she later told the media that she is also gratified by the outcome, albeit four years later.

The incident occurred around 12:30 a.m. on December 23, 2010, while Jones was attending a relative’s wake in Ontario with his common-law wife and their 14-month-old child, who is now five years old.

According to eyewitnesses, Santos walked over to where Jones was standing and fatally stabbed him in the back of his neck because of a feud that reportedly existed between the two men.

Jones was rushed to the Western Regional Hospital in Belmopan, but died on arrival.