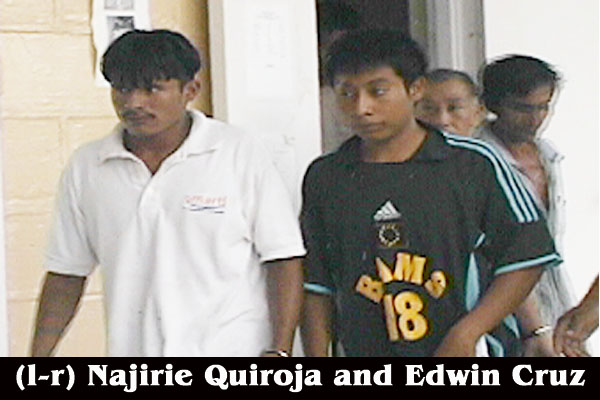 They beat the victim, a diabetic, in the head with a bottle until the bottle broke

Onofre Sabido, a 78-year-old man who is an invalid confined to a wheelchair, was attacked by two thieves who went into his house, beat him in the head with a bottle and robbed him of $400.

Najirie Quiroja, 27, and Edwin Cruz, 18, both from San Jose Nuevo Palmar in Orange Walk, were taken to the Orange Walk Magistrate’s Court on Tuesday on charges of robbery, aggravated assault, and deadly means of harm.

They were granted bail of $3,000 each and released.

Quiroja and Cruz were later rearrested that same day and the additional charge of use of deadly means of harm was levied against them. They were taken back to court yesterday, Wednesday, August 21, and were remanded to prison until Tuesday, October 22.

Police contend that the two men were the ones who went into Sabido’s home and beat and robbed him on Sunday, August 18.

Reports are that about 3:30 Sunday evening, Onofre Sabido, a diabetic who lives by himself, and who buys bottles to sell as a means of making a living, was resting in his house in the village when two men, one of whom was someone he knew who resided in the same village, went into his house. Sabido told police that he was in his wheelchair when the men entered the home. One stood guard by the door, while the other grabbed him and demanded money.

The robber took a bottle that was near Sabido’s wheelchair and beat him in the head so violently that the bottle broke and cut him in his chest and hands. The thief then cut the bag that contained his money, took all the money that was in the bag, and then the two thieves ran out of the house.

Sabido, who was bleeding, screamed for help. His neighbors responded, along with a Special Constable, and they chased and captured the two thieves.

A neighbor who had responded to the screams said that when he entered the house, he saw the elderly man beaten and injured. He was bleeding and his clothes were bloody, the neighbor said. He then took the senior citizen to the hospital.

At the time of the attack and robbery, some children were playing in the yard and recognized the two thieves, whom they knew.

Sabido’s daughter said that her father is presently admitted to the hospital, where he is receiving treatment, but he must undergo a CAT scan to determine the extent of his head injuries.