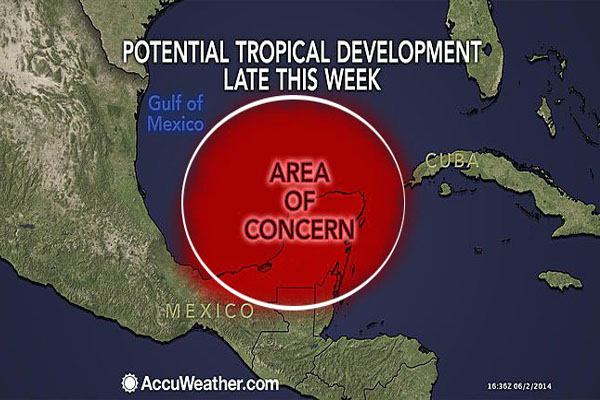 A wide area of disturbed weather spanning from the Pacific waters south of Mexico, to the Gulf of Mexico, which local forecasters say should continue to pour rain over Belize until Thursday, spawned thunderstorms early Sunday morning, announcing the commencement of the 2014 Atlantic Hurricane Season.

The disturbance caused heavy weekend rains in the region, resulting in a mudslide which killed a family of 5 in Huehuetenango, Guatemala.

Belize’s Chief Meteorologist, Dennis Gonguez, told Amandala that the area of low pressure is not expected to cause any major impact on local weather, and it is not currently forecast to lead to cyclone formation.

Gonguez said that showers are expected to start in the southern part of Belize again tonight and move up to northern Belize, because the low pressure system over our region has been moving very slowly.

Although the system has caused inundation along the Philip Goldson International Highway, Gonguez said that the downpours were normal for the rainy season, which spans June to November.

Accuweather is reporting that the Pacific Tropical Depression Two-E, which is located just south of neighboring Mexico, is due to strengthen Tuesday and could develop as it crosses the Bay of Campeche at mid-week. It is expected to impact Mexico and Central America tonight.

2014 was one of Belize’s hottest years on record